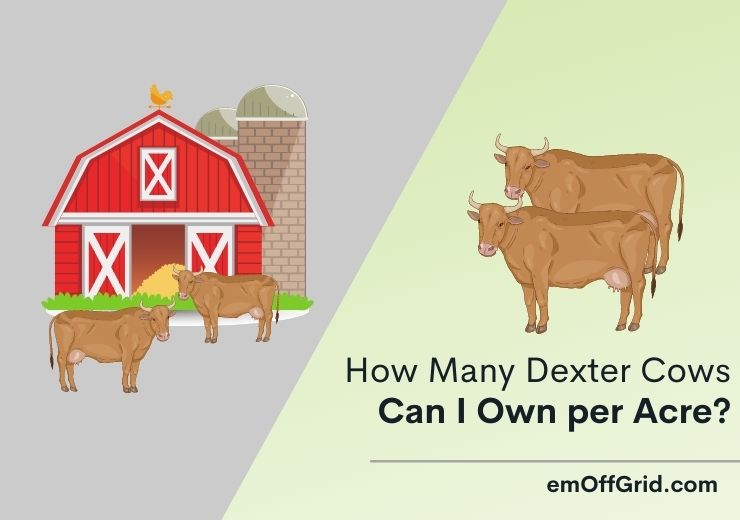 The idea of having fresh milk straight from your home sounds like a great idea. It is a very good idea.

One of the miniature cattle breeds that most people are excited about is the Dexter cow. This cow is known to be very resilient and versatile.

Even though having a cow on your farm is a good idea, some things would stop you from doing it.

One of the largest problems people will face when they want to rare cows is the size of the land. What do you do when you have a small piece of land but still want a Dexter cow?

Well, this article has every piece of information you need about Dexter cows. In this post, we will help you figure out how many cows can fit in your piece of land.

We will also give you additional information about Dexter cows including their care, appearance, origin, and much more. Let’s get started.

It is believed that the Dexter cow breed was originally from Ireland and was moved to the States in the 20th century.

The number of cows in the US has grown over the years because of their small size and the ease of maintenance and care.

You will notice that most of the Dexter cows have a black color. However, that is not always the case because some might have a dark red color.

Nevertheless, compared to other cows, they are smaller.

In regards to temperament, it is different for different cows. Some might be quite docile, while others get angry very fast.

If the cow was handled constantly by its breeder, it grows to become docile and is a perfect mother, and will calve easily.

How Many Dexter Cows Can I Own Per Acre?

The Dexter is a small cow breed and the smaller size translates to less food and fewer space requirements compared to other full-sized cows.

However, before you can decide to put a cow on your land, there are things you should know.

The number of Dexter cows you can have on your land will depend on several factors such as the soil, climate, pasture available, rotation sequence, as well as rain distribution.

In general, however, a Dexter cow does not need much space. If you have one acre or two, you should be able to keep around 2 Dexter cows. Additionally, they are lighter compared to standard-sized cows.

For that reason, the pasture will not beat up as badly as you would expect. It is an important consideration because nobody wants their source of food to be destroyed.

Even though it would be a great idea to freed grass for your cow, certain treats would help in their growth. That includes some grain.

In high summer, a Dexter would survive properly on around one acre of land. Half an acre would also suffice.

How Much is a Dexter Cow Worth?

The cost of a Dexter cow might be different based on aspects such as the breeder, its size, and age. Since they are not easy to find, they can be more expensive compared to other breeds.

When it comes to feeding, these cows do not need a lot of space for pasture. Each animal would be good with around ½ an acre of green grass.

Alternatively, you can choose around 15 or 12 pounds of hay coupled with some grain daily. These animals are good at foraging and will eat what goats eat. They are hardy and will even do with some rough pasture.

You still need to get them some fencing. Sheep fencing should be perfect since they are smaller breeds.

You should also provide a constant clean water supply. The shelter is also important because of the weather inclement. The animals can survive in any weather and will not easily contract any diseases.

What are Dexter cows good for?

People keep Dexter cows for different reasons. You can choose to get this animal for your kids as a sort of pet. They are docile and friendly when handled properly and children will have fun feeding and raising them.

However, these are animals that will provide more than fun. They produce milk and are great sources of milk and meat.

The size of the cow you want to raise will determine the amount of land you might require.

A Dexter, for instance, is a very small cow and would be perfectly okay with a small piece of land. One acre of land will be enough for a small breed like a Dexter.

How long does a Dexter cow live?

How many liters of milk does a Dexter produce?

It is known that a Dexter is small but will produce milk like a standard cow. You should expect the Dexter to produce up to 20 liters daily. However, the average is around 10 liters.

How much meat does a Dexter cow produce?

If you have a steer that is around 3 years old, you should get about 460 kilograms of meat. Within 14 months, they should get to 180 kilograms with intensive farming.

Dexter cows are great for small farms and homesteads. Even though they might have some faults, they are good with children as pets and are good mothers to their calves.

Milk produced by Dexter cows is rich in protein and butterfat. We highly recommend that you consider getting a Dexter cow for your farm regardless of its size. Thanks!