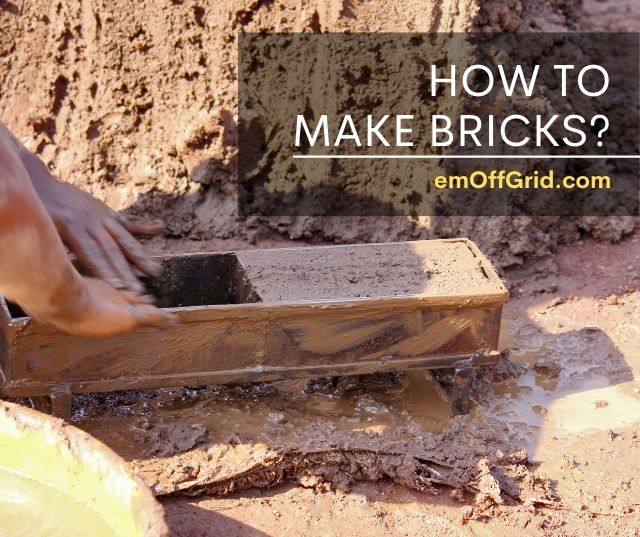 Want to know how to make bricks?

Bricks are tiny pieces of construction material that are commonly formed from baked clay and secured with mortar, a bonding agent made mostly of cement, sand, and water.

Brick has long been a popular building material because it retains heat, resists corrosion, and is fire resistant.

Brick is a great material for constructions in restricted areas and curving designs since each unit is small—typically four inches broad and twice as long. Furthermore, with modest maintenance, brick constructions often survive a long period.

Bricks have traditionally been used for wall coverings, but they may also be utilized for ornamental reasons. Traditionally, bricks were formed from clay and burnt in a kiln, but you can create your own using concrete.

How Many Types Of Bricks Are There?

There are five types of bricks on the basis of materials which are discussed as follows.

It is made by squeezing clay into molds and then frying and drying it in kilns. It is the most often used brick. When used in building, it necessitates plastering.

This type of brick is manufactured by molding clay and fly ash at a temperature of one thousand degrees Celcius.

Fly ash includes a high concentration of calcium oxide. This is why it is generally known as self-cementing.

When it comes into touch with moisture, it normally expands. It has fewer pores than clay bricks. It proved to be a smooth surface, so no plastering was required.

Concrete brick is one of the least commonly used bricks.

It is of poor strength concrete and of inferior quality. Such bricks are used above and below the damp proof layer.

Such bricks may be used for façade, fencing, and internal brickwork because of their sound reduction and heat resistance capabilities.

If the pigment is added during the production process, it might have different hues. It should never be used underground.

Sand-lime Brick: Sand, fly ash, and lime is combined and pressed together to form a brick. A chemical reaction occurs during wet mixing to bind the liquids.

Firebricks are often referred to as refractory bricks. It is made of a specially constructed earth.

It can resist extremely high temperatures after being burned without losing its shape, size, or strength.

The major body of brick is composed of natural clay minerals such as kaolin and shale.

Small quantities of manganese, barium and other additives are mixed into the clay to create distinct hues, and barium carbonate is used to strengthen the chemical resistance of the brick to the elements.

Many additional additives have been utilized in brick, such as papermaking byproducts, ammonium compounds, wetting agents, and so on.

How To Make Bricks For Off-Grid Usage

The raw materials are crushed and ground in a separator and a jaw crusher as the first step in the production of brick.

After that, the best ingredient mix for every bunch is chosen and purified before becoming transported to one of three brick shaping processes:

Extrusion, molding, or pressing, with first being one of the most customizable and hence the most common.

After the bricks have been manufactured and all further operations have been completed, they are dried to eliminate excess moisture that might cause breaking during the subsequent burning process. They are then burnt in ovens and chilled.

Finally, they are dehacked, which involves mechanically stacking them, wrapping them in steel bands, and padding them with plastic corner protectors.

First, each of the components is sent into a separator, which eliminates any large material.

A jaw crusher with horizontal steel plates then squeezes the particulates even further.

A scalping screen is usually used to divide the varying kinds of material after choosing the raw materials for each batch of bricks.

Material of the right size is transferred to storage silos, while oversized material is pulverized by a hammermill, which uses quickly moving steel hammers to smash it.

The hammermill employs another screen to restrict the maximum particle size that exits the mill, and discharge is routed via a series of vibrating screens that filter out material of unsuitable size before it is moved on to the next stage of manufacturing.

Pulverized stuff and water are poured into one side of a pug mill that employs blades on a revolving shaft to cut through it and fold together material in a shallow chamber, which is the most prevalent way of brick formation.

The combination is subsequently sent through an extruder at the far side of the mill. The extruder is usually composed of two cylinders.

The first uses a vacuum to remove air from the ground clay, avoiding fracturing and other problems.

The second chamber, a high-pressure cylinder, compresses the substance so that it may be extruded through the die by the auger.

Chamfering devices were created to create a trench in brick for uses such as paving. Rollers are used in these devices to imprint the brick as it is extruded.

They are sometimes fitted with binder clips to chamfer and cut in one process. These devices can manufacture up to 20,000 units per hour.

The kind of sandy coating employed, which also is applied during the extrusion process, is influenced by how soft or hard the extruded material is.

The soft material is coated using a continuous, vibrating feeder, whereas rough material may need to be brushed or rolled on.

A pressure roller or compressed air is used for harder materials, and sandy blowing is required for especially hard substances.

Before firing, the brick must be dried to eliminate excess moisture.

If such moisture is not removed, the liquid would evaporate away too quickly during the fire cycle, causing fracturing.

They are made up of a lengthy chamber through which the goods are gently moved. External factors of fan-circulated warm air are poured into the dryer to speed up the drying process.

After drying, the bricks are put (typically mechanically) onto vehicles and burnt.

The same trucks that carry the bricks through the drying process often transport them via of tunnel kiln.

These vehicles are moved through the kiln’s constantly regulated temperature ranges at a rate determined by the substance.

Automatic setting machines capable of setting bricks at speeds exceeding 18,000 per hour and rotating the bricks 180 degrees has also been developed.

A stack is typically laid up in rows eleven bricks wide, encased with steel bands and covered with plastic strips that act as corner guards.

The brick is subsequently packed and delivered to the project site, where it is often unloaded using boom vehicles.

Most firms are involved in complete quality management and statistical control programs.

The latter entails setting control limits for a specific process such as temps while dry or firing and monitoring the parameter to ensure that the relevant processes stay within the limits.

As a result, the process may be managed as it occurs, reducing flaws and increasing yields.

What Can You Use Bricks For?

There are lots of uses of bricks in off-grid living which are given as below.

Stairs In The Garden

If your property slopes, foot activity may have worn a path through your grass all the way down to the bare dirt. Why not connect two levels using stairs?

Lawnmowers and weed whackers may do a lot of damage to the plants in their path. Use a brick edging to solve the problem.

For increased stability, put them end to end on the ground, or dig a trough and place them sideways in the earth.

A Retaining Wall is a type of wall that is used to keep things if you have a sloping landscape. Build a retaining wall out of piled bricks to level it out.

Line the wall with landscaping fabric and fill in the gaps with enough dirt to level the garden.

If the walk to the house is a well-worn rut through grass, it is indeed essential to enhance the curb appeal with a well-planned brickwork walk.

The lawn is a lovely spot to sit and relax, especially if the ground is firm enough to prevent lawn chair legs from slipping into the ground.

Place brick to create a little pad beneath an armchair, or create an entire outdoor room complete with garden seats and other lawn-friendly equipment.

Place your arrangement in the shade for cool bricks beneath your bare feet in the summer, or in the sun for an extra degree or two of heat on a cold day.

Bricks have been used in construction instead of stones and are still used by the people. Some of the most common uses for building bricks are given below.