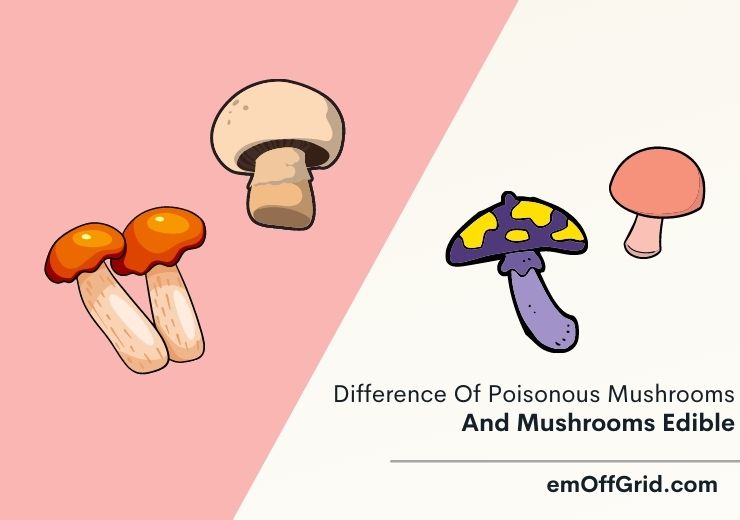 There are many varieties of mushrooms in the wild, however, not all will offer you food. Some are edible, while others are poisonous, and you should know the difference.

Edible mushrooms are safe for human consumption, while the other category can cause food poisoning.

Food can be scarce when living off the grid. Mushrooms can be the best alternative for meat or fish.

Today, mushrooms form a diet in many homes and five-star hotels and are some of the most expensive dishes. They can be grown commercially or found naturally in the wild.

In this article, we will explain the difference between poisonous mushrooms and edible mushrooms.

We will also help you to identify toxic mushrooms and early signs of eating them. Continue reading for these and many more about mushrooms.

Mushrooms are famous sources of low-calorie, protein-rich foods with great taste and many health benefits.

It is also packed with different vitamins and minerals, making it the best addition to any diet. They are essentially used to enhance the flavor of many recipes.

Mushrooms have health-boosting vitamins, minerals, and antioxidants that make them great friends to your immune system.

If they grow in nature or are cultivated outdoors, mushrooms pack a lot of vitamin D. They are also known to lower blood pressure and help with weight loss.

The nutritional content depends on the variety and growth conditions. Crimini, for example, is rich in zinc.

This is a vital mineral needed by human bodies to develop a stable immune system. The nutritional content of mushrooms is better illustrated in the table below.

Mushrooms are excellent sources of food for off-gridders. Apart from their high nutrition value, they grow and mature fast, providing the needed food in a crisis.

However, you cannot go about eating everything named mushrooms because some are poisonous. You should know how to identify and avoid them.

What Mushrooms are Edible?

Edible mushrooms are those species that do not cause food poisoning when consumed and have a desirable smell and delicious taste.

They belong to the fungi family and bear big enough to be seen by the human eye. Edible mushrooms are consumed for their nutritious values.

Edible mushrooms can be cultivated commercially or harvested from the wilderness.

Commercially harvested species include the following: 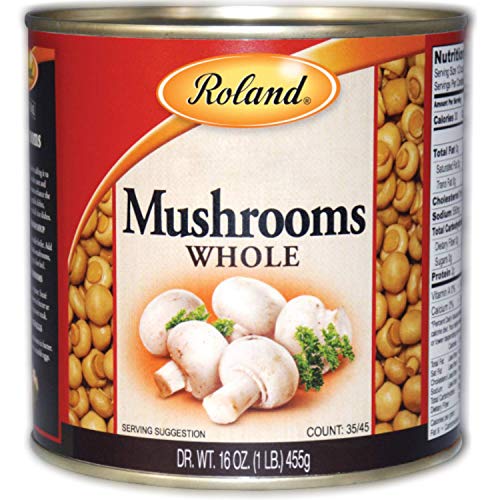 Some wild edible mushroom species include the following:

What Are Poisonous Mushrooms?

Poisonous mushrooms (also known as toadstool) contain toxic substances that are toxic to humans. Symptoms of mushroom poisoning usually cause gastrointestinal discomfort and can also be fatal.

They can show up in just a few minutes to days, depending on the species. Death may result from the third to the tenth day.

Most wild mushrooms are poisonous. You are, therefore, advised not to eat any of them unless you are sure of their edibility.

They also look very similar to the edible ones, and only keen eyes can tell the difference. The secret is making yourself familiar with the mushroom species you intend to gather from the wilderness.

Some of the poisonous mushroom species include the following:

Edible and poisonous mushrooms differ in many ways, and you can identify them using physical appearances.

It is crucial to know which mushrooms produce toxic substances to avoid them when foraging for the same.

The main difference between edible and poisonous mushrooms is the toxins that are present in the latter.

You can use your five senses to tell the differences between poisonous and edible mushrooms.

The smell, color, taste, texture, shape, size of the cap, and gill appearance can help you gather safe mushrooms when foraging.

As a rule of thumb, a mushroom is safe for human consumption if and only if the following statements describe it:

The stated rules do not mean all the remaining ones are safe. We have just given insight into what you should consider safe. We will discuss more in the next section.

You can rely on the physical characteristics of mushrooms to tell if it is safe or not. There are six main traits you can use, and they include the following:

These physical characteristics will guide you on what mushrooms are edible while warning you about what you should avoid. Read each subsection keenly to get all the information presented.

Based On Characteristics On The Cap

Mushrooms are usually covered by veils when sprouting. These may appear as rows of patches or dots when they mature. We can use them to know whether the mushroom in question is edible or not.

Red caps or any other odd colors are an indication of the presence of toxins. They should be avoided when foraging for mushrooms in the wild.

Based On Cap Shape

Most edible mushroom species bear bun-shaped or convex caps. Others, such as chanterelles, have concave and wavy caps.

Poisonous mushroom species are characterized by convex caps that flatten as they near maturity. It is crucial to find young and fully-grown mushrooms and observe the different shapes of the caps.

Caps of most edible mushrooms stretch from the stem as the plant increases in height. In the process, a small ring is formed around the stem. That feature is called the annulus, and it is not present in poisonous mushroom species.

To effectively tell the difference between edible mushrooms and poisonous ones, you need to dig up the roots to observe the base of the stem.

The former group usually has a narrow base stem that becomes smaller and smaller as you move towards the root tip.

Poisonous mushroom species have a noticeably bulbous stem base, as seen in the Amanita muscaria. You should be very cautious about handling species that display such characteristics.

The Color Of The Spore Print

Fortunately, you can determine the mushroom’s spore print color by yourself. To do so, remove the stem and place the girls on dark or white paper and let the setup stand for several hours.

You can then use the data obtained to find the species name and its edibility from a mushroom guide.

The Size And Color Of The Mushroom’s Gills

Mushrooms have different gill colors and sizes. We can use these to tell whether it is edible or not.

You can also use the color of the gills to tell the edibility of a given mushroom. Most poisonous mushrooms have white gills, while edible ones have brown to black gills.

If you observe the growth cycle of a poisonous mushroom, you will notice the consistent white gill color.

This is where your sense of smell will be tested to save you and your family. Mushrooms have distinctive scents that set them apart. You have to test the mushroom for odors by following a procedure.

Crush part of the mushroom’s cap and take your time to get the smell. Lack of odor shows that the mushroom species are edible. Most mushrooms with distinctive aromas are likely poisonous and should be avoided.

The test may be inconclusive. That is because it depends on the sense of smell, which can vary from one individual to the others.

Also, some scents are vaguely or ambiguously described. You need to use it with other methods mentioned in this article.

How Do You Tell If You’ve Eaten A Poisonous Mushroom?

Mushroom poisoning varies depending on the consumed species. Different types have different toxins that manifest or affect people differently.

Symptoms can appear almost immediately after ingesting it, or it can take up to a few days.

The most common signs and symptoms of eating poisonous mushrooms include the following:

Mushroom poisoning can be fatal. Consult a medical specialist as soon as you see or experience the above signs and symptoms after consuming mushrooms.

Your quick action can tell the difference between life and death.

Clinical diagnosis of mushroom poisoning is almost impossible. Mostly, your doctor will ask you about the food you have eaten recently.

The accuracy of the diagnosis depends on the information you will provide and the treatment prescribed based on it.

It is easier to manage mushroom symptoms if there is a positive identification of the cause. Otherwise, our doctor will consider the situation serious and recommend all possible supportive approaches.

The early volume of resuscitation is preferred for kidney-related syndromes. For amatoxins, gut decontamination may be prescribed. That involves whole-bowel irrigation.

Other approaches to mushroom poisoning treatment include the following:

Do’s And Don’ts About Mushrooms

Eating mushrooms is risky even after the positive identification of the species.

Some can be safe on some individuals but cause stomach upset and discomfort on others. So, what are the DOs and DON’Ts that make consuming mushrooms safer?

Which type of mushroom is poisonous?

What happens if you step on a poisonous mushroom?

Nothing happens. Yes, you heard it right! Mushroom poisoning occurs when you eat it. Smelling, touching, seeing, or stepping on it will not poison you, however, you should wash your hands or feet to stay safe.

A poisonous mushroom has strange colors on the cap, bulbous stem base, convex cap, and white gills.

The gills are also attached to the stem instead of the cap. Refer to the characteristics of poisonous mushrooms discussed in this article for more information.

Mushrooms are excellent sources of food for off-gridders. However, care should be taken not to gather poisonous species.

These can cause illnesses and result in death in severe cases. This article should only be used as a reference and not a complete handout on edible and poisonous mushrooms.

We have described the physical characteristics of edible and poisonous mushrooms.

We hope that you have learned a lot from the information presented. Please share the article, and don’t forget to explore related posts at the Em Offgrid. Thank you for reading this post!