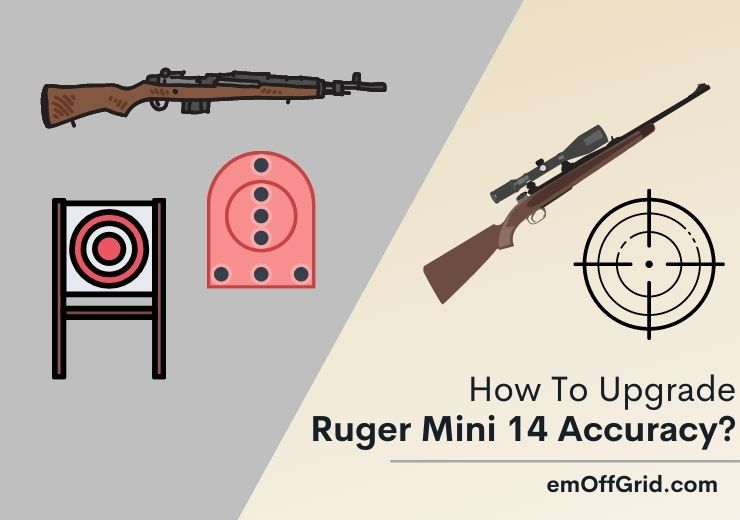 In the days when Ruger Mini 14 were introduced, riflemen tended to be relatively happy if their semi-auto carbine could reliably hit a basketball-sized target at 100 yards.

Frustrated with such poor precision, the modern gun consumers started to ask themselves how to upgrade Ruger Mini 14 accuracy.

Without question, the Mini 14 can be upgraded somehow, and mainly the early models are grateful for alterations and improvements.

With an effective range of 200 yards, it was initially designed for taking smaller-sized game and coyotes on the open range.

Although Mini 14  did exactly what folks in those days wanted, Ruger soon was faced with customer complaints about accuracy issues.

As many of us know, the Ruger Mini 14’s most significant problem that results in inconsistent accuracy was its thin and tapered carbine barrel, roughly processed gas blocks, and a creeping stock 5.75 – 7lbs trigger pull.

Ruger addressed those issues in their new and improved Mini-14 in 2005, but if you own an older Mini 14, you may find here some helpful info for upgrading this reliable and handy little rifle.

A number of firearm constructors often exploited the design details from past and popular military firearms making all-around and robust weapons chambered in new-fashioned calibers.

One of the biggest US arms companies, Sturm, Ruger & Co., owes a significant part of their success to a Bill Ruger inspiration in a military firearm.

For those interested in the historical aspect, the Ruger’s.22 Standard Automatic Pistol was a close copy of the Luger and Nambu design.

The first Ruger rimfire autoloader, the 10/22 Carbine, was an attempt to evoke the nostalgic appeal of a battle-hardened veteran, M1 Carbine.

Ruger’s semi-automatic Mini-14 wasn’t an exception, as its design mimics the simple military style of the M-14.

As its name suggests, the Mini-14 resembles the traditional looks of the US Rifle 7.62mm M14 while borrowing tried-and-true M-1 Garand-style action.

Like M14, the Ruger Mini-14 retained feeding on the box magazines and a similar trigger guard with a mounted safety lever.

On the other hand, this tiny M1-style carbine weapon mirrored an M1-style action with a rotating bolt, trigger group and simplified gas system.

As a miniature version of the M14 battle rifle, the Mini-14 was initially crafted for light hunting/sporting purposes, plinking and combative self-defense.

First of all, the M-14 was never meant to be a precision rifle. There was nothing wrong with a rifle since the Ruger Mini-14 was a perfect specimen of craftmanship and industry from that period.

As a mass-produced weapon of the seventies, the Mini 14 brought to the shooting public exactly what they want: durability, reliability, and ease of use.

Later, the technological and metallurgical processes have changed, affecting the modern shooting public to set new standards and expectations from firearms.

This is why the rifle’s large tolerances, barrel vibrations, and creepy triggers force Ruger to leave the past behind and improve their method of production.

Complaints referred to the gas blocks that have inconsistent contact with the barrel and tiny “pencil barrels” prone to overheating.

Listening to what their customers are complaining about, Ruger has worked long and hard to alleviate the problems.

The issues with the original Mini-14 rifle have been solved to some extent with the introduction of the Ranch Rifle in 1982.

How To Make A Ruger Mini 14 More Accurate

Before you start looking for the aftermarket enhancements for your Mini 14, you should know that Ruger also launched an improved Mini 14 version with tighter manufacturing tolerances in 2003.

Although they introduced a new modified gas system, integral scope bases and a new folding-aperture rear sight, there is a place for any shooter to update the styling and get greater potential accuracy.

For many Mini 14 fans, the simplest and easiest way to solve this problem is to install a bolt-on accuracy device.

Another quicker and less expensive solution that will decrease the average size of your 100-yard groups and keep the barrel’s harmonics ideal is to bed the stock.

What will I use Ruger Mini 14 For?

While the Mini 14 with an average 100-yard group ranging from eight inches to six inches was acceptable for blinkers and occasional paper shooters, hunters and serious riflemen need something more accurate with consistent precision.

Basically, if you are shooting at predators or planning to fill the fridge with some hogs, you will need a Mini 14 capable of greater precision.

However, the market has offered improvements for any users category and budget.

Factors Upgrades and Accessories for Your Mini 14?

Though Ruger made constant improvements during the Mini’s 47-year lifespan, you can always make some improvements install many standard Mini 14 upgrades.

You can upgrade your Ruger Mini 14 trigger in several ways, and while some recommend gunsmiths to do this job, you can always find a good video on how to do a Mini trigger job yourself.

The easiest and safest way for most Mini 14 owners would be to polish and smooth the trigger group to eliminate the gritty factory trigger pull.

You can also try to lighten the trigger pull and get the lightest pull weight possible, but the trigger system on Mini 14 is known to double fire, or even you can wind up with full auto.

Another way would be to make trigger modifications using aftermarket trigger parts like a spring kit that will give you powerful trigger pull reduction and eliminate the heavy factory gritty trigger pull.

Finally, you can go with an aftermarket drop-in trigger option and simply exchange your stock trigger system.

Obviously, the gas block and its installation were weak links in this firearm system, so Ruger made early modifications to make the rifle more efficient and functional.

Although the precision of a Mini 14 was increased by tightening the manufacturing tolerances.

You can get a customizable gas block if your gunsmith shaves off some metal and restore a better fit against the barrel.

Many would agree that iron sights on an original Mini 14 are not perfect and disproportionately made. A very large front sight would completely block out the target, making aiming very challenging. 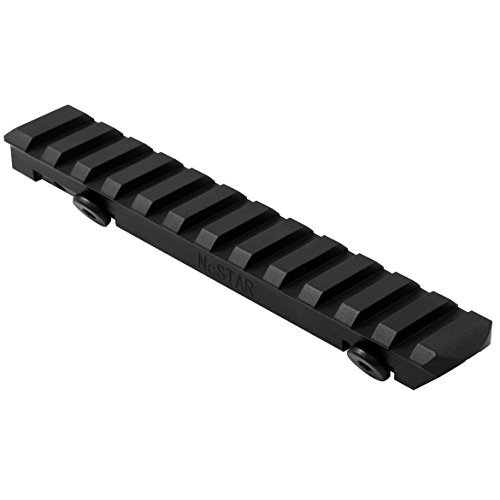 One of the easiest and simplest internal upgrades, which is beneficial not only for the accuracy but also for the extended service life of your rifle and less action noise, includes shock or recoil buffer.

Mini owners usually install shock buffers on the front and back of the recoil spring guide rod (operating rod) to eliminate contact with the receiver and protect it from excessive shock.

Recoil buffer pads are a worthwhile and inexpensive upgrade which installation is simple and can be done without any special tools.

Since the thin barrel is prone to overheating while accuracy-killing vibrations, that were the major contributor and a principal cause of the inaccuracy of original Mini 14s.

The barrel strut you clamp onto the barrel and fits up under the gas block to dampen barrel vibrations.

This device is highly conducive to accuracy, offering an improvement of 50-75% reduction in group size.

The original Minies with earlier straight-barrels were infamous for their poor accuracy. The obvious solution for this problem was to build it up with a barrel worthy of your expectations.

The rebarreling to a heavier barrel is one of the most important upgrades. Unlike other more cheap improvements, this, of course, comes at a price. But it is a game-changer.

Compared to the older Mini’s, Ruger’s new Ranch Rifle has a cold hammer-forged barrel with a slightly heavier barrel contour for better accuracy.

Although new Mini-14’s benefit from these barrel enhancements, the accuracy problems remained somewhat. Luckily, you can upgrade your Mini 14 rifle with a custom barrel that shoots sub-MOA.

TekMat Gun Cleaning Mat for use with Ruger Mini-14

Most of the old Mini 14s owners know for the rifle inaccuracy and tendency to shoot discouraging groups of between 6 and 9 inches out of the box.

A relatively loose action-to-stock fit was one of the main reasons for pure accuracy.

Maybe the most affordable way to upgrade Mini 14 accuracy was to bed the stock.

Basically, the bedding process will require you to remove the front metal band and then apply the bedding compound to strengthen the front part of the stock.

At a relatively low price, you can bed the action into the stock and get more secure the action to mitigate the problems.

Notes If You Are A Beginner

If you plan any upgrading of any firearms besides essential hand tools, you will need specialized gunsmith tools, vise and proper kits.

Ruger Mini 14 isn’t an extremely customizable rifle like AR-15, but you can make some upgrades all by yourself without being a gunsmith.

While you can make few modifications and save some money, fixing the trigger issue is going to require the practical knowledge and skill set of a gunsmith.

You can upgrade your Mini 14 Trigger with some aftermarket trigger kits in less than 15 minutes, but if you want to replace the barrel, you will need gunsmith-level skills and proper tools before you begin disassembling your Mini 14.

Are The New Ruger Mini 14 Better?

Ruger did a tremendous job in 1982 with the Ranch Rifle version of the Mini.

A great part of the gun community prefers the looks and ergonomics of military-style rifles, and the new Ruger Mini 14 provides more opportunities for optics, flashlights, and lasers.

You may consider having a Mini 14 SCAR stock, but even with more traditional styles of stocks, the addition of rails, bipods, and high-capacity mags will enhance the tactical needs you would want in a home defense scenario.

Aside from all tacti-cool accessories, the Ranch rifle’s receiver with rounded exterior contours makes it a pretty handy rifle.

In addition, you can find on the new Mini 14 a few modifications such as lightweight stocks with recoil pads, better slings, and modular mag pouches.

Basically, use this compact and robust semi-automatic chambered in two-two-three as a plinker or as an ordinary backseat rifle most of the time.

You will not be overly disappointed with the average 100-yard group of 8 1/2 inches.

In its fifth decade, Mini 14 is a fascinating weapon that attracts considerable attention from new generation buyers.