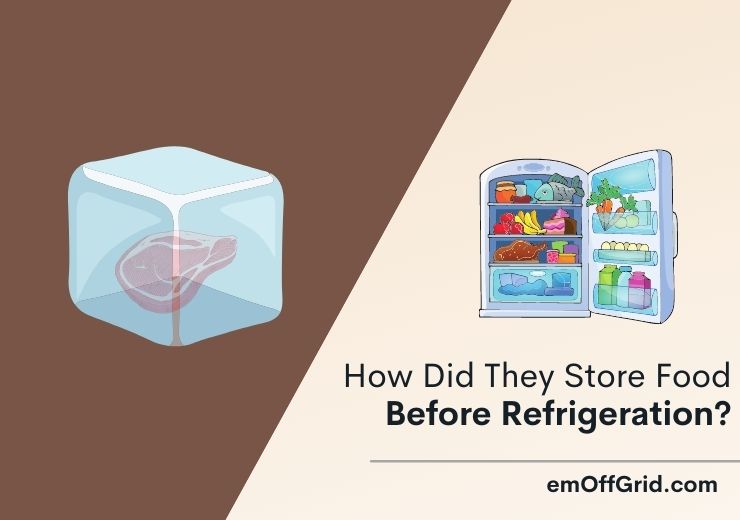 For centuries, human beings have been using different food storage methods to store food before refrigeration. They never needed a refrigerator.

And even if they did, they could not get it. So, they adopted ways of extending the shelf life of various foods that can also help you as an off-gridder.

Some foods are seasonal, but that doesn’t mean you should waste them when they are abundant. Instead, you can preserve them for future use.

Fortunately, you don’t need electricity or fridges to keep your foods fresh and safe for longer.

We will discuss ancient methods used to store food before the refrigeration era. Keep reading for details!

First Refrigerator In The World

Refrigeration for food storage has evolved from the ancient ice houses to the internet-connected fridges we know today.

During primitive times, around 1500 B.C., the form of refrigeration that existed was the ice house. That involved the use of ice to preserve food.

The history of modern refrigerators dates back to the 1740s. The first artificial fridge was invented by a Scottish scientist, William Cullen.

His invention was based on the cooling effect of rapidly heating a liquid to gas. Though his idea was never actualized, it inspired subsequent inventors.

In 1802, an American businessman, Thomas Moore, made the first ice box fridge to cool dairy products and keep them fresh. That was to meet the ever-growing need for fresh food by urban dwellers.

An American inventor, Jacob Perkins, achieved a remarkable milestone in the evolution of refrigerators by making the world’s first functional vapor-compression refrigeration system.

His invention uses ether in a closed cycle. However, his prototype was not commercially produced.

His invention was a great success in many industrial processes. In 1913, the world’s first electric refrigerator was invented by American Fred W. Wolf.

Bacteria are found in the soil, water, air, and even food that we eat. With a refrigerator, you can extend the shelf life of various foods. 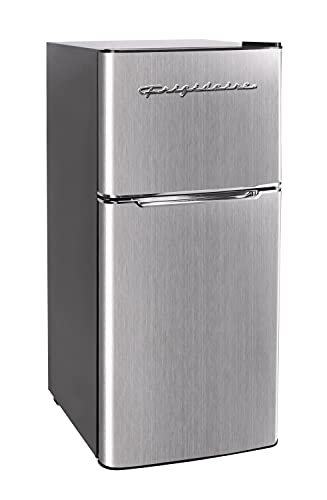 13 Methods To Store Food Before Refrigeration

Most fresh foods such as meat, fruits, and vegetables are not available all year round. They are highly perishable.

If not preserved in a refrigerator, they may not go for more than a week. Luckily, many ways of storing food without refrigeration exist.

Regardless of the food preservation method you choose, your food will last at least a day longer.

They all inhibit bacterial multiplication, which causes food spoilage. The following are some of the ways to consider:

This method involves keeping food in naturally cool places. It is one of the oldest and easiest methods if you want to store potatoes, carrots, cabbage, beets, apples, onions, garlic, etc.

Both taste and texture can be maintained, but only for a while.

Temperatures in these places are a bit low, hindering the growth of bacteria. The chilling method can preserve different foods, as already listed above.

This is one of the most advanced methods of food preservation for its age. It originated from Persia around 400 BCE. People built dome-shaped mud-brick structures called Yakchal.

Frozen ice, used as a preservation agent, was kept in the structure and could last all year round.

The Yakchal method relied on the low humidity in the desert and semi-arid areas to enhance water evaporation. That approach made evaporative cooling more effective.

With the cool temperatures inside the structure, meat, vegetables, and fruits could last longer without spoiling.

This is one of the ancient food preservation methods that date back to 12,000 B.C.

It was the commonly used technique because of its simplicity. As the name suggests, it involves leaving food out in the sun to dry.

It is ideal for cereals, meat jerky, vegetables, fruits, and pretty much any food. However, it is labor-intensive and unreliable because of its dependence on weather.

Salting is also a century-old method of food preservation for extending the shelf life of meat, fish, and vegetables. It can be used with other methods such as drying and smoking or on its own.

Salting involves pressing salt in the food you want to preserve before keeping them in a container with more dry salt. Salt dehydrates food and inhibits bacterial growth.

That slows down the decomposition rate.  Alternatively, food was soaked in brine, a highly concentrated salt solution.

Some foods stored through salting could last for as long as a year. The method is also simple and effective.

The smoking method dates back to the Paleolithic era. It was primarily used for preserving meat or fish. It involves hanging meat stripes or cut-open fish over a fire to absorb smoke and dry.

Smoking also had the additional advantage of adding flavor, the reason why it is still used today.

Commercial smokers have only made the process easier, but the principle remains unchanged. Smoked fish or meat can last for months before showing any sign of food spoilage.

The sweet method, also known as sugaring, is a food preservation process involving desiccating food by first dehydrating it and then packing it with pure sugar.

Sugar can be crystalline or liquid forms such as honey, syrup, or molasses.

The sweet method is ideal for preserving fruits such as ginger, cherries, citrus, apples, pears, etc., but you can also store meat chunks using this method.

When sugar is added to foods, it draws water from food. That action deprives bacteria and other microorganisms of the water they need to reproduce, thereby giving food long shelf life.

Fermentation is an ancient technique of preserving food that involves breaking down carbs and sugar using bacteria and yeast.

The same method changes low-acid foods to high-acid foods, giving them a longer shelf life. The alcohol or acid formed is the natural preservative.

Fermented food can last longer and is safe for human consumption. However, expect flavor and texture changes since the food is pre-digested by the microbes.

Fermented foods come with many health benefits, including the following:

The canning method, otherwise airtight food preservation, was invented by a French confectioner, Nicholas Appert, in 1809.

This centuries-old technique is effective as it can extend the shelf life of some foods for up to decades.

It involves pre-cooking the food to kill bacteria and other microorganisms and storing it in an airtight container. Food remains in the jar until you are ready to consume it.

Canning is ideal for preserving meat, fish, dairy products, and many vegetables. Just ensure you don’t leave the can open long enough to allow bacteria to get in again. 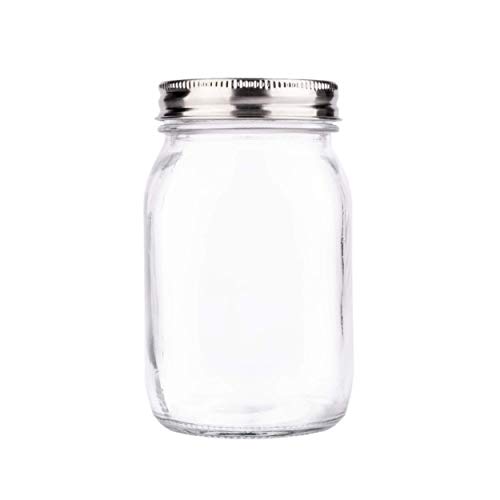 The pickling method dates back to 2030 B.C., originating from Europe. It is still a food preservation method in the modern world.

The cucumber in your burger or staples such as kimchi is preserved through pickling.

Prickling is effective in preserving fresh meat, vegetables, and fruits. It is the soaking of food in water, salt, and herbs.

However, people started experimenting with different solutions such as vinegar, lemon, and spices to improve their taste.

Some people have also found ways of making pickling faster by boiling food in the solution instead of waiting for days. Once infused, food is transferred to airtight jars with fresh brine or juices.

Confit is a French word that means to preserve. It is a traditional method of food preservation used by home cooks and professional chefs to preserve meats by cooking them in their own fat.

But it can also be used for fruit and vegetables.

Food is slowly cooked, packed, and then submerged in inhospitable liquid. That creates a barrier that prevents the entry of bacteria and other microorganisms.

Heating food at high temperatures in the oil also expels water from it. So, it is generally unfriendly for bacteria even before introducing the barrier.

A food-grade mineral oil, also known as liquid paraffin, is non-drying oil with no color, taste, or odor.

This grade of mineral oil is safe for human consumption. So, don’t just use any other mineral oil to preserve your food.

Food is immersed in mineral oil, which blocks out air. Without oxygen, bacteria cannot multiply. The preserved food can, therefore, stay fresh for long.

The shelf life of eggs can be extended for up to one year by preserving them in mineral oil.

Meat preserved using this method is known as biltong. This technique originated in South Africa.

It involves using vinegar to lower pH, salt to dehydrate food, and drying at low humidity. The condition created inhibits the growth of microorganisms.

This method is ideal for meat preservation because it does not alter color, texture, and taste. Instead, it adds flavor when the appropriate ingredient is used.

Larding is a traditional method of preserving food. It involves covering meat with lard fat and keeping it in an airtight jar or container.

Store the larded meat in a cool and dry place to ensure the lard is intact. Warm or hot environments will cause it to melt, removing your armor.

Looking for other method to preserve meat? Here are 10 Effective Ways To Preserve Meat Without Refrigeration.

Preserving food can be a challenge when you live off-grid. Fortunately, you don’t have to rely on electricity to extend the shelf life of perishable foods.

Use any of the traditional methods discussed in this article to store food for future use.

Thank you for visiting the Em Offgrid. We are grateful for your time and invite you to share this article with your friends. Also, let us know the food preservation method that is the best for you.