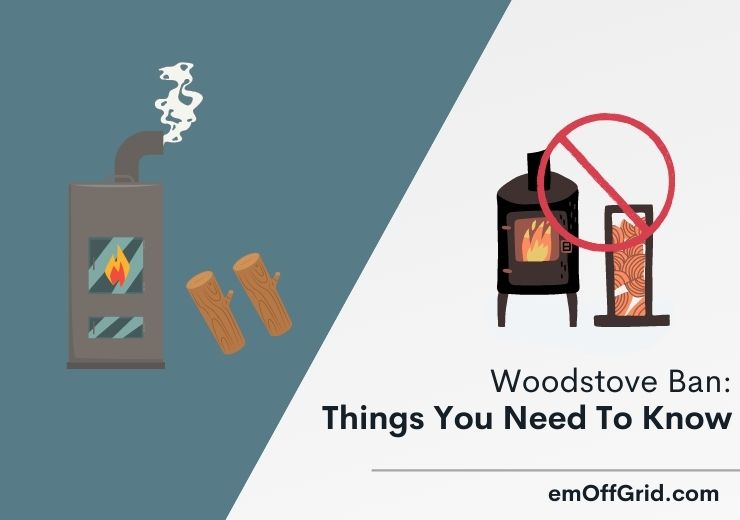 Many off-gridders are using wood-burning stoves for cooking or warming their homes. However, not all of these stoves are eco-friendly.

There is a move by the government to regulate the type of wood stoves you should have in your home to reduce the impact on the environment.

The government is trying to force legislation in the United States that will only allow people to use EPA-certified or recommended wood stoves.

Currently, people are using wood-burning stoves, but that will not be the same case in 2022. Does that mean you will not be able to enjoy wood burning at home?

We will talk about the woodstove ban and things you need to know. We will touch on the regulations in different states and what people are thinking about them. Keep reading to find out more!

Are Wood Stoves Being Banned?

No. There will be no ban on wood-burning stoves in the United States, United Kingdom, and European Union.

Instead, the relevant bodies are working to reduce fumes or emissions from wood-burning stoves. That will be achieved through different ways, which include:

The emissions from wood-burning stoves depend on the stove design, its usage, and the type of fuel burned.

Burning wet wood produces more particulate than burning dry wood. By ensuring that consumers have access to dry woods, the emissions or environmental pollution can be reduced.

As a consumer, you need to be proactive in combating environmental pollution. What the government asks you is to buy certified wood-burning stoves and have them installed by competent people.

What Are The Regulations For A Wood Burning Stove?

As a result, the government enforces new rules to reduce its emission by controlling the type of fuel used in wood-burning stoves.

Before diving deeper into the topic, let’s look at an overview of EPA regulations for wood stoves over the years.

EPA regulations on wood-burning appliances have evolved since 1988. The laws have been amended to remedy the ever-deteriorating air quality because of particulate matter emissions.

How have they changed over the years? Here is an overview:

This is where everything started. EPA promulgated a regulation that requires all wood stoves manufactured on July 1, 1988, or sold in the market after July 1, 1990, should meet the air pollution standards.

The regulations didn’t apply to wood-burning stones manufactured before that date.

The 1988 standards were amended in November of the same year to stop the sales of wood heaters that had their certificate initially revoked. That also didn’t affect wood-burning stoves that were already sold.

In 2015, EPA changed the previous standards to include the residential wood stoves.

Manufacturers of wood pellet stoves must ensure that they don’t produce more than 2 grams of particulate matter per hour. That became famously known as New Source Performance Standards (NSPS).

Wood-burning stove manufacturers were expected to comply with these new standards by 2020.

Theoretically, all the wood-burning stoves in the market now should be EPA certified and comply with the EPA 2015 standards.

The report addresses some concerns by providing basic information about the final wood heater rule and its potential impacts.

The new EPA 2020 standards required that all solid fuel heaters, including wood stoves, fireplaces, and inserts, emit no more than 4.5 grams per hour of soot.

That allowed more stoves to get into the market than were previously allowed due to the restrictions.

Additionally, the standards require that only the recommended fuel should be used in the stove. The stove manufacturer had to mention specific fuels that should be burned in the appliance in the user manual.

The new report released in April 2021 describes the existing policies that use different strategies to enhance the previously set standards on wood-burning stoves.

It states how and when the wood is used as a fuel in homes and the need to replace uncertified wood-burning devices with lower-emitting ones.

The new standards ensure a cleaner environment where people heavily rely on solid fuels such as wood and coal.

It was to improve the air quality to reduce respiratory or cardiovascular diseases caused by environmental pollution.

What Types Of Wood Stoves Are Covered Under The Rule?

The EPA standards don’t apply to all stoves that we use at home. The regulations are there mainly for wood-burning stoves, furnaces, boilers, and heaters.

You have to be careful about the new rules if you use any of the following:

On the other hand, you are safe if using stoves or fireplaces not covered by the EPA Standards. Such devices include the following:

Generally, wood burners are heavily regulated devices. Check what your state laws state about violating the regulations or using stoves that don’t comply with the EPA standards.

Here is our list of 8 Best Wood-Burning Stove For Off-Grid Living. 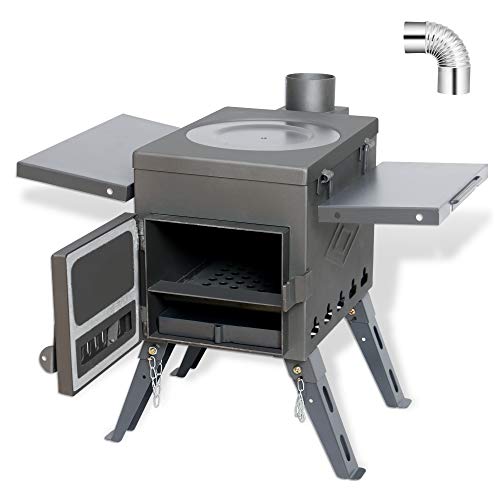 EPA regulations on wood stoves have been received by a mixed reaction.

Both manufacturers and consumers have both raised their concerns, some of which have been addressed. How are you affected by the new regulations?

Manufacturers are required to design more energy-efficient wood-burning stoves that comply with the standards.

Most wood stoves were left out by then. Fortunately, manufacturers have made it possible for consumers to always have these devices.

According to the EPA regulations, manufacturers should have their stoves tested and certified before sending them to the market.

They, additionally, should specify the type of fuel to be used in their stoves by spelling it out clearly on the user manual.

Manufacturers have no other choice but to comply to avoid attracting heavy fines and license withdrawals as specified by the state laws.

It may mean losses to the company, but that is why they are given a period to comply.

Both manufacturers and users of the wood-burning stoves are affected by the rules. As a consumer, you are expected to use only EPA-certified devices and have them installed by professionals.

You also need to use the stove appropriately to avoid emitting excess particulate matter into the air.

Citizens who rely on wood stoves may be required to go to the market for new ones, especially in areas with high pollution rates.

When shopping for a new or replacement wood stove, you should look for the EPA certification sticker. That is usually found on the back of the stove or in the user manual.

You also need proper training on how to use the stove for minimum emissions.

Regulating the type of solid fuel to be used in wood stoves can also lead to hiked prices. That means consumers will dig deeper into their pockets for the same.

Like manufacturers, citizens also have no option, especially off-gridders who don’t have other means of cooking and warming their homes.

You may not be forced to replace the existing one, but it is something you should consider doing. 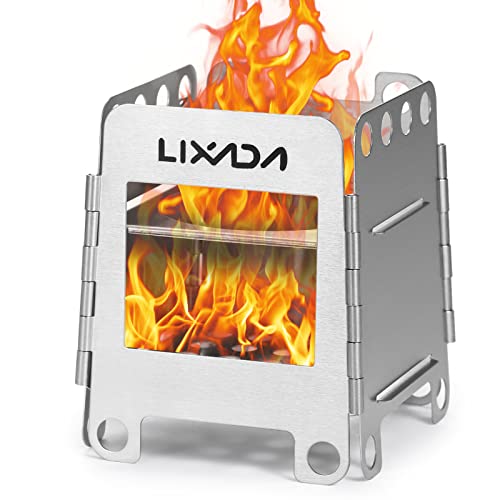 The EPA standards are implemented differently in various states. The laws, fines, and taxes vary from one state to the other.

It is, therefore, your responsibility to check your state laws concerning wood-burning appliances. We will provide a summary of the standards in only 7 states here.

The EPA Standards are in force in Colorado. The regulations apply to the sale and installation of wood-burning appliances and their use during high pollution days.

If you are a resident or want to trade in these items in Colorado, refer to the air quality control commission regulations to find all the restrictions.

The breach of laws attracts penalties and fines. To stay safe, familiarize yourself with the air quality control commission regulations, as outlined by the Colorado Department of Public Health and Environment.

The State of Idaho encourages taxpayers to buy EPA-certified wood-burning stoves and pellet stoves to replace the old ones by offering tax deductions.

Learn all about the eligibility and requirements to benefit from this incentive.

The State of Idaho also has burning restrictions as part of the Rules for Control of Air Pollution in Idaho. These rules are applicable statewide.

Michigan State also has regulations on wood burning. The ordinance outlines all language restrictions on outdoor wood-fueled boilers as well as patio-wood-burning units.

It is also concerned about air quality and provides tips and facts to the residents through the website.

Like Idaho, Montana also offers an incentive to the residents regarding an income tax credit of up to $500 for using EPA-certified stoves.

The aim is to reduce emissions by encouraging people to replace their less-efficient burners with the recommended ones.

Sales and installation of wood-burning stoves that are not certified by EPA are prohibited in Oregon.

The Oregon Department of Environmental Quality has the mandate of enforcing the laws that regulate solid fuel burning, especially during air stagnation periods.

All solid fuel-burning appliances in Oregon must comply with the standards set under ORS.

Additionally, the state provides information on the type of wood-burning appliance that should be used, the harmful effects of smoke, and how to reduce it.

To fund the program, Washington State imposes a levy of $30 on the sale of each wood-burning device.

Like all other states considered, Wisconsin also has a dedicated program that promotes public awareness of wood-burning appliances. Things that are promoted are things such as how the unit is to be used, the health effects of using wood as fuel, complaint advice, and model ordinance.

The model ordinance also has regulations on outdoor wood-fueled boilers.

Vermont enacted laws to regulate hydronic heaters installed after October 1, 1997. It only regulates the installation but not emissions.

The law was amended in 2007 and 2009, requiring that only appliances that comply with the emission standards be sold in Vermont.

On December 15, all hydronic heaters sold in Vermont ought to comply with the EPA standards. The emission rate for wood stoves was 4.5 g/hr.

Environmental protection is our responsibility. We should, therefore, take any measures in place to conserve and protect it positively.

The more stringent EPA standards are not to punish you but ensure you get cleaner air to prevent possible respiratory and cardiovascular diseases.

EPA emission standards do not apply to the existing wood-burning stove in your home. It is different than simply putting an end to using these devices.

However, you should take it upon yourself to replace your wood stove with an EPA-certified one.

Thank you for your time at the EM Offgrid, and we encourage you to explore the website for more articles.