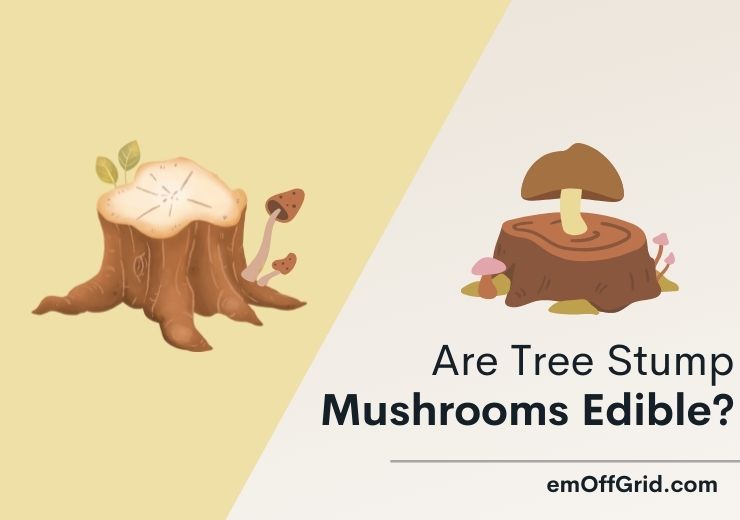 People have foraged wild mushrooms for food all around the world throughout history.

Wild mushroom gathering can also be a very gratifying and intriguing hobby. However, those who do it must proceed with extreme caution and ask themselves: Are tree stump mushrooms edible?

While many wild mushrooms are nutritious, tasty, and safe to eat, some can be dangerous to your health and even cause death if consumed.

As a result, it’s vital to only go mushroom hunting with someone who knows how to identify both edible and dangerous mushrooms.

DISCLAIMER: The content provided in the article above is only for informational and educational purposes based on the authors’ knowledge. It is for reference only and not aimed at replacing expert opinions. If you decide to act on the information provided above, you do so at your own risk. This site will not be held liable for any damage.

Many varieties of mushrooms grow on tree stumps, and some might even exist on them long after the tree dies.

So if you are wondering if tree stump mushrooms are edible, you should know that the definitive answer to that is that some of them are.

Some kinds of tree stump mushrooms are safe to eat and can be used for medicine, while some are poisonous.

This is why it is important to have an expert identify the type of mushroom you have before you eat it.

Edible wild mushrooms are a delectable excuse to spend time in the woods. Mushroom hunting can also be highly dangerous because many mushrooms seem very similar.

It’s easy to pick the incorrect mushrooms by accident, which might have disastrous (or even fatal) results. Throw the mushrooms out if you’re not sure.

It’s preferable to learn about mushroom hunting and identification from someone who knows what they’re doing (or a properly curated guide).

This is why we have compiled this guide for the  5 best edible tree stump mushrooms.

Hen-of-the-woods are grayish-brown in color, with white undersides and a branch-like stalk, though coloration varies.

These mushrooms are most prevalent in the fall, although they can also be found in the summer, but less frequently.

Older orange or reddish specimens should not be eaten because they could be tainted with bacteria or mold.

This fungus also includes potent health-promoting chemicals, such as glucans, which are complex carbohydrates.

In animal tests, glucans extracted from hen-of-the-woods have been proven to have immune-boosting characteristics.

Research has also proved that this species has some anti-cancer, anti-inflammatory and cholesterol reduction capabilities.

Hen-of-the-woods has a savory, rich flavor that goes well with stir-fries, sautés, grain dishes, and soups.

Chicken Of The Woods

Nothing looks like a chicken of the woods mushroom, making it one of the easiest fungi to identify.

Sure, there are other orange mushrooms and lookalikes, most notably chanterelles, but the peculiar form and yellow pore surface are dead giveaways.

It grows best in the summer, although it can be found from spring to summer if the climate is favorable.

The name “chicken of the woods” refers to the flavor of the bird rather than its look.

It is also known as the “Sulfur Shelf Mushroom .”Recipes for chicken of the woods mushrooms typically take advantage of the mushroom’s peculiar flavor and texture, which is remarkably similar to cooked chicken.

Chicken Of The Woods Identification

There are no gills on this bracket mushroom. It has a brilliant yellow underside and is huge and orange or salmon-pink on top.

They form bunches along the trunks of various trees, mostly oaks. Make sure you can correctly identify the host tree.

Nutrition of Chicken Of The Woods

These mushrooms are low in calories and high in nutrients such as fiber, vitamin C, potassium, zinc, phosphorus, and magnesium, as do other mushrooms.

Polysaccharides, eburicoic acid, and cinnamic acid are among the plant chemicals found in chicken-of-the-woods mushrooms.

In test-tube and animal tests, they were found to have antifungal, tumor-inhibiting, and antioxidant activities.

Cooked chicken-of-the-woods mushrooms are preferable to raw ones. Sautéing them in butter, adding them to vegetable dishes, or incorporating them into omelets will bring out their meaty texture and robust flavor.

Mushrooms with gills are notoriously difficult to detect, making them unsuitable for novice foragers. The exception is oyster mushrooms, which are both common and easy to detect.

Smaller clusters with a flat, fan-shaped look are common. Their colors are virtually usually white and don’t vary significantly.

Oyster mushrooms have a thick, white, mild-tasting meat that is packed with vitamins and minerals.

B vitamins and minerals, including potassium, copper, iron, and zinc, are particularly abundant. They also have anti-inflammatory plant components in them.

Oyster mushrooms are delicious when sautéed with onions and garlic as a side dish. They’re also good in soups, pasta, and meat recipes.

Morels, one of the earliest mushrooms to appear in the spring, attract tens of thousands of foragers to the woods each year.

They’re difficult to notice since they mix in with the forest floor, but they’re quite easy to recognize once you do.

They have four common lookalikes, some of which are dangerous, despite being a “simple to recognize” wild mushroom. As a result, you must use extreme caution with this one.

Featuring a distinct “honeycombed” patterned cap, which is highly wrinkled and yellow-grey.

Morel Mushrooms can be found in basically all regions beneath hardwood trees in springtime. The middle of the hollow is hollow. 2 to 9 centimeters in height and 2 to 5 cm in thickness

The morel includes a lot of potassium, vitamins, and copper, which are good for your heart.

“Morels are recognized to possess one of the greatest quantities of Vitamin D among all edible mushrooms, and the morel is a wonderful source of Vitamin D.”

Strong flavor, ideal when cooked in butter, and frequently served with leeks.

The Ringless Honey Mushroom is a little brown mushroom that feeds on living or dead tree roots. It usually grows in enormous clusters, with the mushroom stems united at their bases.

It has a late summer to the early fall season. They are extensively distributed in North America, Europe, and maybe abroad.

These mushroom species feature a dry and scaly cap with ringless stalks. Often found with its honey-colored gills in clusters with a convex cap shape. Its convex shape, however, flattens with age.

It has gills of different ranges, from broad to narrow and brownish to pinkish. It features thick stalks that taper towards the root.

Honey mushrooms are flavorful, flexible, and easy to use in a variety of recipes, in addition to their numerous health advantages. They have a characteristic, chewy texture and a slightly sweet yet earthy flavor.

They may be sautéed for a quick side dish or stir-fried with other vegetables for a nutritious meal.

Alternatively, add these mushrooms to pasta dishes, soups, or stuffings to add more flavor and antioxidants to your favorite meals.

How To Clean And Store Mushrooms

Since mushrooms are grown in the ground and have a lot of muck stuck to them, it’s critical that you clean mushrooms properly before cooking them to eliminate all of the mud and dirt.

How To Clean Mushrooms

Here are the steps to clean mushrooms:

●     Remove the mushroom’s stem/stalk using your hands; it will come off easily.

●     Then, using your fingers, peel the top layer of the mushroom’s skin; it will come off easily as well; you may not even need a knife.

●     The Mushrooms are now ready to use after a gentle rinsing.

How To Store Mushrooms

Mushrooms will only last two days in the refrigerator before becoming brown, and after three days, they will be odd.

To extend the life of the mushrooms, remove them from the plastic packaging and store them in an airtight container with a paper napkin or paper towel on the bottom. 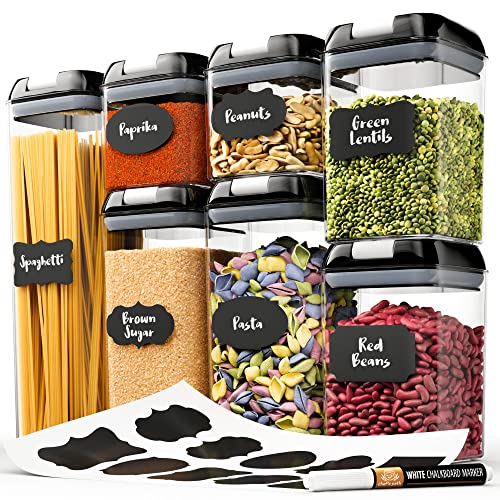 Here are the 5 main kinds of poisonous mushrooms to watch out for:

Death caps are one of the most deadly mushrooms, and they are responsible for the majority of mushroom-related deaths around the world.

They are grown in a variety of countries all around the world.

The death cap has the same toxins as this fungus, which grows in Europe, Asia, and North America. It has a brownish cap that is smooth and cone-like. If consumed, they are extremely toxic and can be lethal.

Autumn skullcaps, often known as “deadly Galerina,” are one of the most toxic species of mushrooms. They grow on rotting wood and have little brown crowns.

The death angel is a plant that grows throughout the West Coast of the United States and is related to the death cap. If eaten, this largely white fungus can bring serious disease and death.

These are especially harmful because they mimic tasty genuine morels. They are not fully hollow when cut, unlike actual morels. 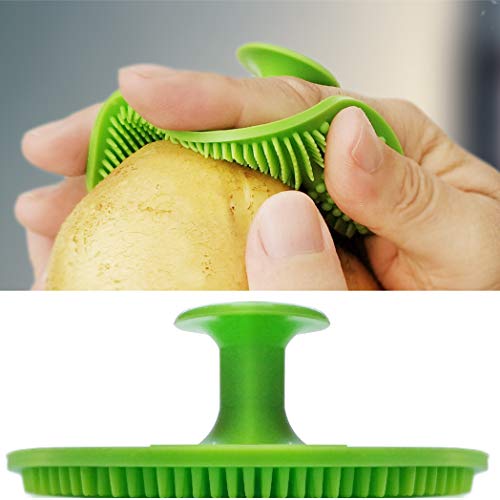 Are mushrooms that grow on tree stumps poisonous?

Some varieties of mushrooms that grow on tree stumps are poisonous, while some are edible.

Can I eat mushrooms that grow in my yard?

Before you eat any mushroom you find in your yard; you have to identify what species it is and determine if it is edible or poisonous.

Are backyard mushrooms poisonous to dogs?

Edible or not depends on the type of mushroom.The poisonous species of mushrooms are poisonous to dogs, while the edible ones are safe for them to consume.

While many mushroom kinds are safe to eat, some, such as the death cap, fake morels, and Conocybe filaris, can have major health consequences and even death.

Foraging for wild mushrooms can be a productive and enjoyable pastime.

Novice mushroom hunters, on the other hand, should team up with professionals who are familiar with mushroom identification to learn how to correctly identify and handle mushrooms.