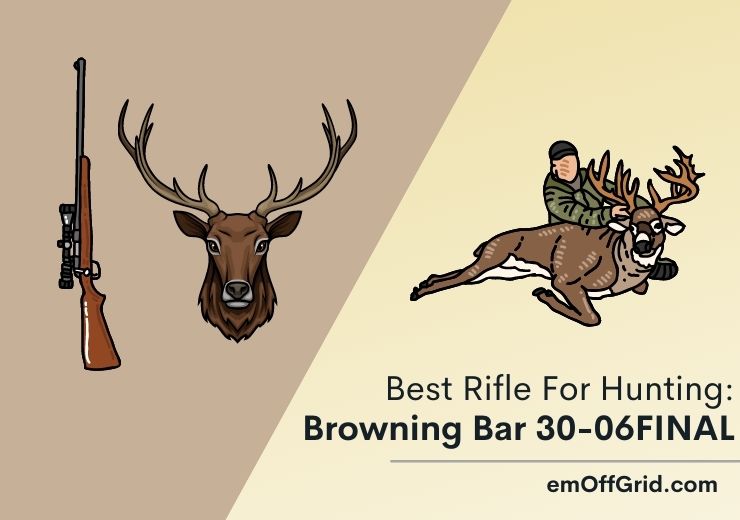 A legendary rifle that can be pushed out farther than most novelty fancy products, the Browning Bar series of semi-automatic rifles is always on our list of favorites.

A Browning BAR is considered one of the finest semi-automatic designs ever devised, especially when paired with 30-’06 Springfield round.

With any of these calibers, Browning BAR functions reliably with decent accuracy for a semi-auto hunting rifle.

For sure, the BAR .30-06 is not a typical bench rest shooter’s gun, but with expected at least 1.5-2″ shooting groups at 100yrds, it is among the most accurate of the autoloaders.

Of course, by applying a few tricks or modifications, any of the BAR owners can make tighter shooting groups and improve rifle accuracy.

Browning Bar’s Position In The Market

The Browning BAR is a typical illustration that old designs should not be automatically rejected as inferior to anything modern or new.

When Browning launched the sporting BAR at the US hunting/sporting market, semi-automatic rifles were relatively rare in the late 1960s.

At the time when BAR was created, the main idea was to compete with Remington’s autoloaders and now long-discontinued Winchester 100.

The BAR was almost twice the cost of its rivals but with a nearly flawless record of functionality.

Today, if we neglect the big-game hunting ARs, there are few semi-auto offerings worth considering, except the most recent player from Benelli, the R1 Model in 30-06 Springfield.

The Benelli R1 is also a hunting-catered rifle with shooting groups averaging 1.2 inches, but it is pretty expensive and more angular than BAR.

Browning’s offering is a timeless classic and among the best semi-auto rifles, but be advised that BAR isn’t cheap.

The great-looking BAR is a bit more reliable than the other semi-autos and the closed bolt operation system is surprisingly accurate as well. This makes it easier for you to understand why this rifle is worth its relatively high price.

There are many good rifles for hunting but if you want a handsome rifle capable of fast-follow-up shots, the Browning BAR .30-06 is certainly one of them.

For those who like short stories. A Browning BAR is a gas-operated firearm with a removable box magazine attached to a trap-door-type hinged floor plate.

However, this premium semi-automatic hunting rifle should not be confused with the totally different US military M1918 BAR.

The BAR sporting rifle, a semi-automatic hunting gun, was designed by John Browning’s grandson and FN engineers and was released in 1967.

Though both a gas-operated, magazine-fed weapon, the military BAR M1918 used a 20-round box magazine and was designed as a light machine gun for World War I.

It was later modified in line with European thought of the 1920s to be used for the technique called the ‘walking fire’ (French: feu de Marche).

As for using the civilian version of the BAR, its primary role was as a hunting rifle, but with a carbine barrel length, the semi-auto BAR is a compact and handy weapon for any home defense or security scenario.

The Browning BAR is not a deer tracking gun, nor was it suited toward that hunting style.

If you walk long distances, BAR .30-06 would not be an ideal gun, however, it would be an excellent option for stalking and tree stand hunting.

For those who need a compact rifle, Browning BAR launched a new version that comes in a carbine barrel length of 18.5″, making it quite handy for a cross-country boar hunt. 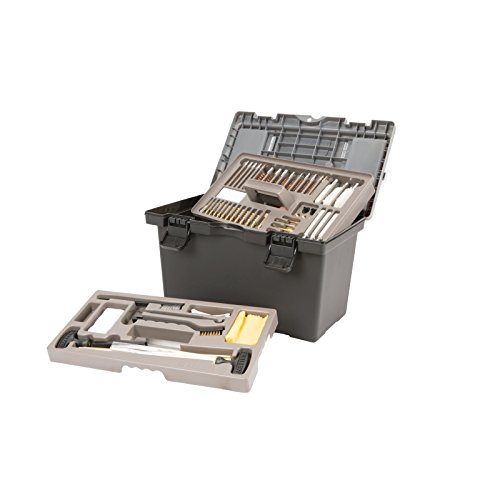 But like most distant relatives, the Browning Automatic Rifle and the BAR sporting rifle have at least one thing in common. In this case, it is a .30-06 Springfield cartridge.

Introduced to the United States Army in 1906, the legendary “thirty-ought-six” remained the US Army standard caliber for all military weapons from the famous M1903 Springfield and M1 Garand repeater to the machine gun M919 Browning BMG and M1918 BAR light machine gun.

The ever-loving .30-06 is a tried-and-true big game round that can dispatch effectively anything that moves between 125 and 750 pounds.

Originated as the .30 cal M1906 ball cartridge with a 150-gr bullet, today .30-06 Springfield is offered in hundreds of different loads and projectiles construction.

The sporting .30-06 Browning BAR rifle isn’t the lightest offering these days, but at 7-pounds 6-ounces, this gun is ideal for driven hunts.

The BAR is available from 6 pounds, 9 ounces to 8 pounds, 3 ounces for magnum calibers depending on chambering and barrel profile.

The original Browning BAR has a magazine capacity of either three or four cartridges, depending on caliber.

If you need the higher-capacity magazines, newer BAR models with high-capacity detachable box magazines hold 10 or even 20 rounds.

The Browning BAR is a lot more expensive than Remingtons or some Ars, with the price that comes in around $1,200 to $1,400 in the US.

The Browning Bar .30-06 is an exciting alternative to hunting bolt guns and AR sporting rifles.

The BAR is the ticket for hunting game anywhere globally due to its over-designed, slab-sided solid receiver that could bear all sorts of pressure safely.

Compared to the bolt action hunting rifles of the same weight that kick about twice as hard, the BAR’s gas operation, weight, and recoil pad make it quite comfortable to shoot.

Over the years, the BAR slightly changed through the Mark 2 and Mark 3 versions.

Depending on versions, BAR kept all steel or aluminum receivers, making it a little heavy but a very solid and reliable gun.

Traditionally, Browning always uses some of the best materials and workmanship, which paired with a semi-auto repeating capability results in excellent reliability and incredible accuracy for that type of weapon. 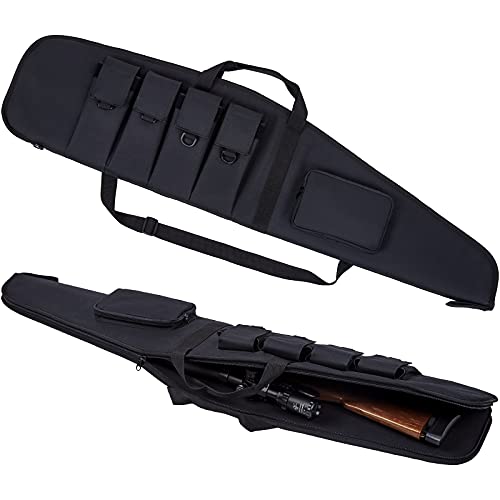 Browning BAR was never supposed to be a highly accurate precision rifle but a semi-automatic sporting rifle for hunters. However, Browning incorporated features mandatory for precision shooting into its original design.

The BAR’s steel receiver was pre-drilled and tapped for scope mounts, whereas its stock design is contoured for use with open sights or optics. The newest BAR version, Mark 3, comes with shims for adjusting drop and cast in the stock.

The Browning BAR is excellent for hunting, and it has long kept first place with follow-up shots because the rifle’s handy geometry allowed it to be pointed and shot fast, almost like a shotgun.

Due to the very gentle rifle’s recoil impulse, Browning brags their BAR had “the fastest second shot” in the industry. However, with the release of Benelli’s autoloader, it fell to second place.

While the Browning BAR handles most popular big game rounds from .243 Win up to belted magnum cartridges such as .338 Win Mag, chambering in the king of calibers .30-06 has gained to the Browning BAR’s longevity and popularity as a hunting rifle.

Current .30-06 factory ammunition is available in various weights ranging from 55 to 220 grains, as a 180-grain .30 caliber bullet is fairly common.

Combining the lighter loads and bullet weights, the .30-06 Springfield will shoot flat enough for varmint and sheep hunting.

If you use a significantly stouter load, a larger mass bullet will be heavy enough to drop a dangerous big game animal or elk and moose.

What is a Browning BAR worth?

If you are one of those who prefer a cross-country boar hunt or driven hunt where you are getting a chance of shooting a big game a number of times each day, a Browning BAR .30-06 is a natural choice.

When you top the BAR with an LPVO (Low Power Variable Optic) with a proper hunting reticle, you will be stunned at its accuracy.

By all aspects, Browning BAR chambered in 30-’06 Springfield is a classy package that still catches many eyes in the field or at the range.

Is the Browning BAR a good rifle?

Given its dependability, smooth function, clean lines, and pretty furniture, the Browning BAR is an ultimate pig rifle that swings like a bird gun.

The gas-operated BAR sports a solid rotary-locking bolt head with seven lugs that dampen the recoil, making it lighter on the shoulder than any bolt action-style rifle.

When combining Browning BAR autoloader with one of the most versatile cartridges on the planet, you will get an excellent primary gun that feels more like your deer rifle than an AR-15.

How accurate is a Browning BAR?

Although Browning BAR’s semi-auto rifle has a great gas operation system designed for reliability and manufacturing, it also rivals the accuracy of most bolt guns.

With this autoloader, you shouldn’t expect 1/2″ MOA accuracy, but you would get at least 1.5-2″ groups at 100yrds with a brand-new firearm.

While this out-of-the-box accuracy isn’t surgical, it is still better than just about any mass-produced sporting semi-automatic rifle.

Does Browning still make a BAR?

Initially, the BAR has been produced in FN Herstal, Belgium, but in the early 1970s, management decided to open an assembly facility in Viana, Portugal.

Until now, the hammer-forged barrels and production of all other parts are still made in Belgium and then shipped to a Browning Portugal plant.

If you’re looking for a classic style, reliable semi-automatic hunting rifle chambered in the powerful and effective .30-06 round; the Browning BAR might be one to look at.

If you want a scoped rifle for treestand hunting that can finish the job with quick follow-up shots, the BAR would be an excellent weapon to own.

Only a couple of civilian semi-autos keep recoil at comfortable, manageable levels and allow you to get back on target so fast like a Browning BAR .30-06.

If you want a timeless piece of history and a contemporary performer all at once, choose the Browning BAR .30-06.