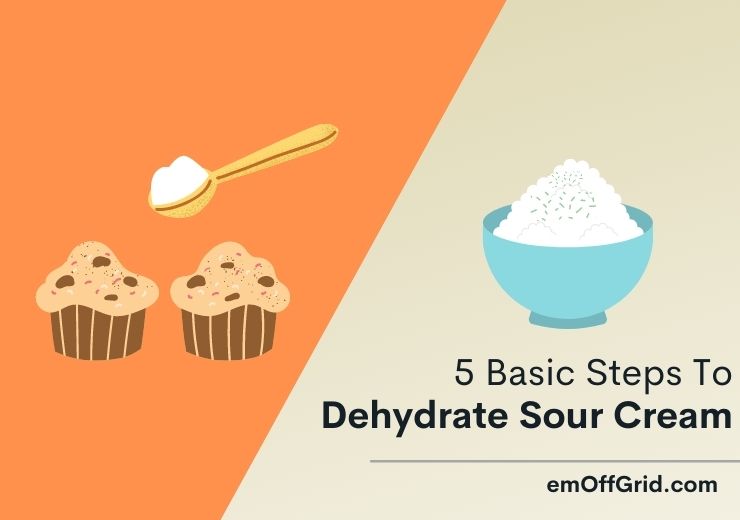 Not everyone understands why you would want to dehydrate sour cream. The truth is, dehydrated sour cream is not easily found on shelves in stores.

However, there are several reasons why you should consider getting some dehydrated sour cream for your kitchen.

While dehydrated sour cream is not easy to find, it is recommended that you have some at your disposal.

That is the main reason why you should learn how to make some for yourself. But the process is not obvious.

For that reason, we have prepared this post to take you through the entire process of dehydrating sour cream.

We have compiled a list of five easy-to-follow steps that will help you prepare some powdered or dehydrated sour cream. Let’s get started.

Why Would I Dehydrate Sour Cream?

In this section, we will be discussing the reasons for dehydrating sour cream.

First, you can dehydrate sour cream to use in other recipes. Sour cream has an amazing flavor and taste, which you can take advantage of when in powder form.

You can easily add the powdered cream to your recipes to add that flavor.

Additionally, dehydrated sour cream will be reduced in volume. So, instead of storing your sour cream in its other form, you can easily dehydrate it and save more of your space.

When you store sour cream, it will only last a short while, probably a couple of weeks. However, when it is in dehydrated form and is stored properly, it will last a lot longer, more months.

We all know that emergencies can come when you do not expect. In such times, it would be better if you had a good source of food at hand. That is what dehydrated sour cream will provide for you.

You can save much more money with sour cream when in dehydrated form. Purchasing in bulk and dehydrating it will help save several dollars.

When you are able to do this yourself, there is a sort of pleasure that you will get from it. There are many more reasons why you should dehydrate sour cream and we recommend them.

Dehydrating sour cream is very easy, especially if you will do it the right way.

It is important that you learn all the steps for dehydrating sour cream so that the results are satisfactory. In general, there are a total of five, very easy-to-follow steps that you should follow.

Let’s get started on the steps.

The first thing you want to do is to ensure that the sour cream is at its best state.

You can do this by stirring it properly so that it becomes creamy and lighter. The reason for this step is to ensure that it is easier to work with the sour cream.

Once stirred properly, the sour cream will become easier to spread on the tray.

Use some baking sheets or a plastic wrap to cover the trays properly. Make sure the trays are completely covered

After you spread the baking sheets or plastic wrap on the trays, put a couple spoonfuls of the sour cream in the middle of the trays and spread them to a very thin layer.

Do not fill more than half of the tray’s depth with the layer. Try your best to make the layer as even as possible.

Note: For best drying, the thickness of the sour cream on the sheet should be less than ¼ of an inch.

Make sure that there are no folds of the plastic wrap that are over your sour cream.

Once you are sure everything is set, put your tray in a dehydrator and set it to around 130 to 140 degrees Fahrenheit.

If the temperature goes higher than that, the sour cream will become brown and it will change to a dry texture.

Note: The temperature of the dehydrator should be set as low as possible.

Additionally, the amount of time it will take for the sour cream to dry will depend on the amount being dried, as well as the humidity levels, temperature, and altitude.

Once it is complete, the sour cream should be brittle and it should have changed color to a yellow ting, not the original bright white.

At this point, the sour cream is still not in powder form. To turn it to a powder form, you should start by putting it inside a food processor.

But the food processor will simply break it down, not turn it to powder. If you have a blender, use it to turn it to a more powdery form.

For the best results with the blender, try blending a small amount at a go.

How to Store and Use Dehydrated Sour Cream?

Once done turning to powder, place it in jars and store in a fridge or a freezer depending on what you have planned.

When you freeze it, it will remain in great condition for a while. You can thaw it out when you need to.

Powdered or dehydrated sour cream is a great addition to recipes. You can add sour cream powder to muffins, dips, sauces, potatoes, cakes, or casseroles,…

It provides that amazing flavor of sour cream to your food and will add a certain creaminess to recipes that need sour cream. The fat is not part of the powdered cream.

Therefore, it will not transform to the normal creamy form used for nachos or tacos.

What temperature do you dehydrate sour cream?

What is the best way to dehydrate?

There are a couple of ways to dehydrate foods including using microwave ovens, electric dehydrating, oven drying, or even solar and air drying.

However, for the best results, we recommend that you use a dehydrator.

Can I dehydrate lettuce?

Yes. You can dehydrate lettuce in different ways. However, for that to be effective, be careful not to cook it or burn it. So, the lowest temperature should be used for dehydrating lettuce.

It is true that dehydration of foods will eradicate moisture, which would help microorganisms such as yeast, mold, and bacteria to grow.

However, the process of dehydrating foods does not eradicate or destroy these organisms.

There are dishes that will be very appealing to you when you use dehydrated sour cream to make them.

We highly recommend that you try out this dehydrating process and see what you can do with the powdered sour cream.

As always, thank you for choosing emoffgrid.com as your reading source! If you are reading this article, I hope you find the shared information helpful to you.